As it’s Valentine’s day, I have decided to repost a piece that I published this time last year for the student-run magazine, HardZine. These are some of the most ‘Romantic’ paintings that I enjoy, if you can think of some others that you believe should be on here then post it in the comments section!

Whether Valentine’s day is a day to enjoy with one’s significant other, or just a commercial creation conjured up by corporate conspiracy to make money; there is no denying the impact that it has on our society. How love is visually represented is wide and varied; from traditional depictions of couples sharing a moment of intimacy by embracing and being intertwined almost as one, through the written form, to the tragedy of a doomed romance. From Renaissance paintings to Contemporary Art, love is an emotion universally explored and understood. To celebrate the day we have come up with our favourite paintings, sculptures and artwork that represent the notion of ‘love’. 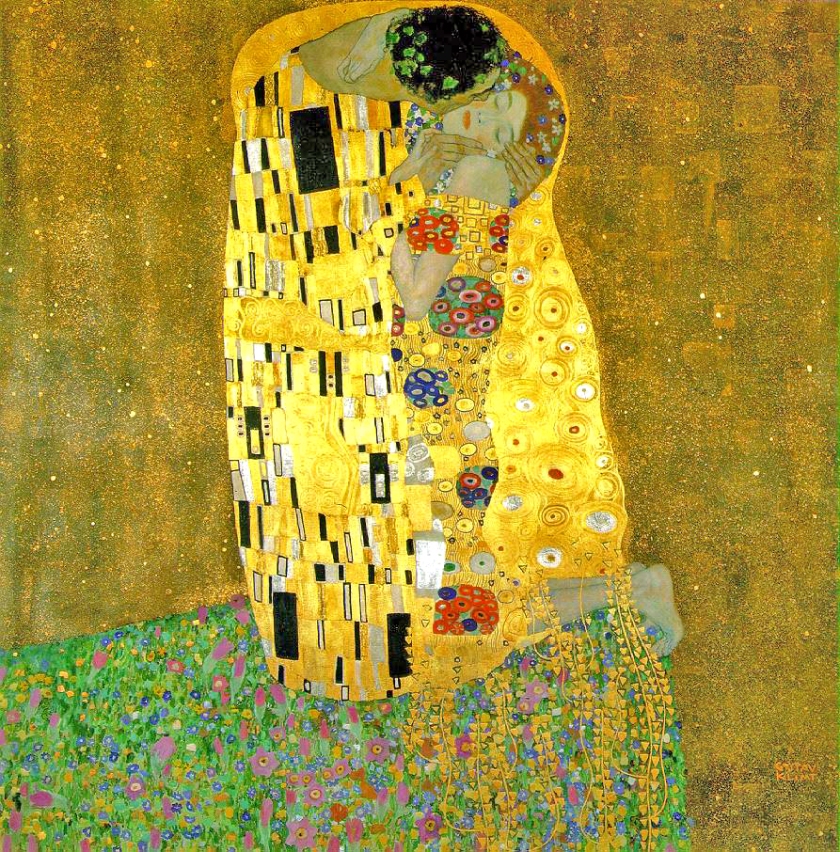 Where does one start when describing and commenting about this iconic painting? The organic representation of a couple embracing is my favourite image of love. The characteristic combination of oil paints and gold leaf of Klimt’s The Kiss, creates an intense and extravagant image. The use of gold leaf, especially on the couple’s form, highlights the notion of intimacy and closeness. Even though the flesh tones seem cold, to me there is warmth that radiates from this image. Ultimately a symbol of love, and one of my all-time-favourites. 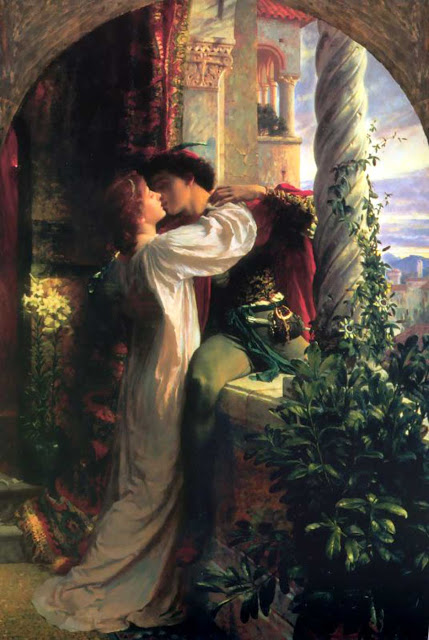 In 2012 survey of the most Romantic pieces of artwork on display in the UK, Frank Bernard Dicksee’s Romeo and Juliet came in top place, making it a worthy inclusion in ‘The Art of Love’. Depicting the last time that the star-crossed lovers, Romeo and Juliet, will see each other alive, this painting is full of rich colour and heightened emotions. A story of tragedy and sorrow, Dicksee perfectly captures a moment of raw emotion and passion. The painting creates the impression that even death won’t ruin love, and that it is an emotion that will continue through the ages.

This marble sculpture of an embracing couple has become an iconic representation of love. Its blend of passion, intimacy and romance, makes The Kiss a perfect addition in this article on ‘The Art of Love’. The rendering of a nude couple refers to the classical tradition, and makes the sculpture not overtly sexual. The Kiss depicts a 13th century Italian noblewoman from Dante’s Inferno who fell in love with her husband’s younger brother. Upon discovering the couple’s secret the noblewoman’s husband kills them. The Classical style and technique used in a modern piece of sculpture intensifies the idea of love as a universal emotion and experience, just like Valentine’s Day, that has endured throughout the centuries.

This early Renaissance painting represents a harmonious embrace between Hercules and his wife Deianira. However, not all may seem well in this encounter, as the silver cloak that Deianira sits on is the cloak that will eventually engulf Hercules in flames when he wears it, causing him to die.  Even though this is a slightly deformed and some-what weird depiction of the human form, there is no denying the love presented between the two mythological characters. A love that can be seen back in Greek mythological tales has lasted throughout the years.

Named Ireland’s favourite painting, Burton’s The Meeting on Turret Stairs tells of a stolen moment between two lovers, similar to Dicksee’s Romeo and Juliet. The subject matter originated from a famous Medieval Danish ballad, and shows the final parting of Helellil and Hildebrand before both are eventually killed by the results of their tragic affair. A fusion of romance and tragedy, The Meeting on Turret Stairs expresses a hopelessness and forbidden love, emphasised by the ‘x’ of Hildebrand’s arms and the lack of eye contact. A representation of the forbidden and doomed aspect of love that may still be experienced today. 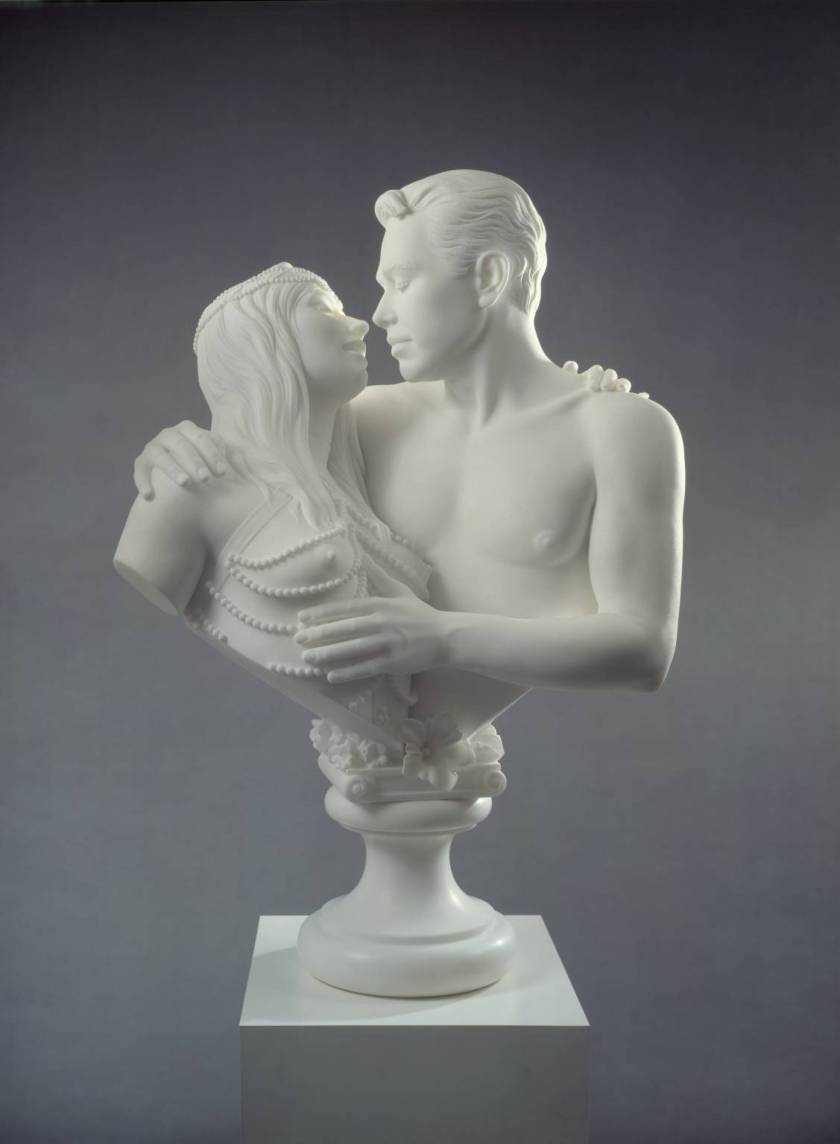 Using the style from Classical busts and statues, Koons Bourgeois Bust represents a couple embracing. Wanting to create something that was ‘very romantic’, by placing the male’ hand toward the female’s heart, and the couples body positioning creates the shape of a heart, intensifying the love portrayed. Bourgeois Bust is a reflection of Koon’s own marriage to porn star Ilona Staller, which was created the year they got married. Seems a little sad however to find out that they later divorced in 1998. Although some-what kitsch, this marble bust has an endearing quality linking the notion of classical goddesses of love with modern forms of romance. 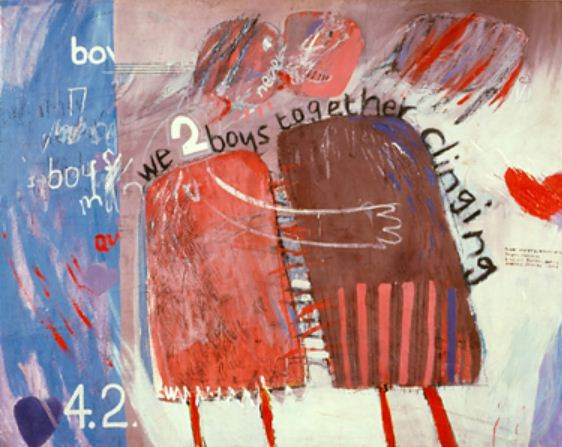 We Two Boys Together Clinging, David Hockney, Oil on board, 1961

A Young David Hockney completed We Two Boys Together Clinging towards the end of his second year the Royal College of Art. This deconstructed, crude and raw painting is a political statement above love, with this particular subject matter and execution being specifically chosen for its effects. The breaking down of visual representation and traditional stylistic qualities for an abstract portrayal, Hockney comments on the way in which society forces and expects people to respond and experience love. During a time when homosexuality was still illegal in England, Hockney takes his inspiration for the subject matter from lines from Walt Whitman’s poem, which he then uses as the title to the piece: We Two Boys Together Clinging. This portrayal of a passionate kiss between the lovers suggests love that was forced to be a secret and hidden from the world, but through the medium of paint is now visible to all. 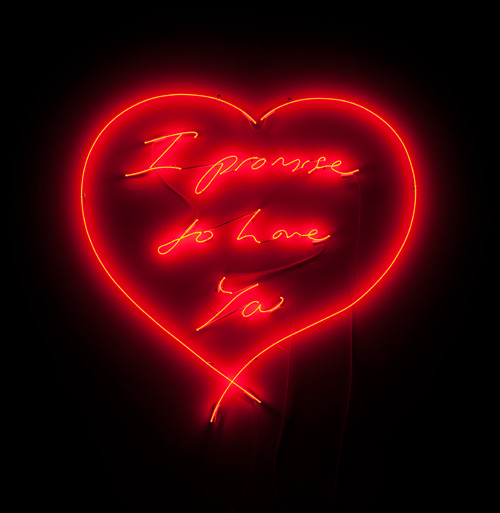 Tracy Emin – an artist full of controversy and the power to created mixed reactions just by the sound of her name – has used the medium of neon lights to portray particular emotions and feelings, and her notion of love. This particular piece by Emin has been included in this article for numerous reasons. The brightness of the illuminated red neon lights with the words slowly glowing to spell themselves out and the eventual building up of red lighting portrays the power of love, and the promise that the many throughout the world make. This almost soul-bearing confession links effortlessly with the idea of love and Valentine’s Day, as millions of couples across the world celebrate their intimate love for one another. The fact that on Valentine’s Day 2008, Emin donated I promise to Love you to a charity auction ‘(Auction) RED’ to raise money for The Global Fund to help women and children affected by HIV/AIDS in Africa, was a message that to me that means ‘love’. Raising over £100,000, I promise to Love you emphasises the different forms of love that can be experienced not only on Valentine’s day, but throughout the years and world. Whether you like Tracy Emin or not, I promise to Love you offers an endearing idea of the emotions and feelings experienced through love. Urgh someone hand me the bucket, I’m getting too soppy.

If you would like to see the article on HardZine, here is the link: http://www.hardzine.com/the-art-of-love/