Following the box-office success at the Whitney Museum in New York, the Jeff Koons Retrospective made its way to the Centre Pompidou this November. However, with the success in the box office, came a myriad of reviews – not all positive. The aim of the retrospective is to offer viewers a clear chronology and documentation of the evolution of the controversial artist.

Chronologically arranged, visitors first encounter Koons’ ready-made works, beginning with his collection of vacuum cleaners from around the 1970s. Having previously visited the Centre Pompidou’s previous retrospective exposition of Marcel Duchamp, and which at one point was still open along side the Jeff Koons show, it is clear to see Koons’ influences in the Duchamp. However, the collection of vacuums I felt were arbitury. For Duchamp, such ready-mades were revolutionary, something never encountered before in the History of Art. But for Koons, it feels contrived and merely an attempt to aggrandise himself to the same artistic and originality as Duchamp. This part of the exposition felt almost like entering a museum for household furniture of the past. Having encountered this part of the exposition first, things could only go up from here.

What I did find interesting from the early work of Koons, is his commentary on the world of marketing and advertising with regards to social class. It is in the ‘Luxury and Degradation’ part of the exposition where visitors are offered a glimpse into the political views. Having observed “how the aesthetic and slogans used in various liquor advertisements varied according to the social class they were targeting”, as told in the commentary on the wall, “Koons reprinted a number of these advertisements on canvas in oil-based inks.” It is here that the seriousness of the underlying problem inherent in marketing. 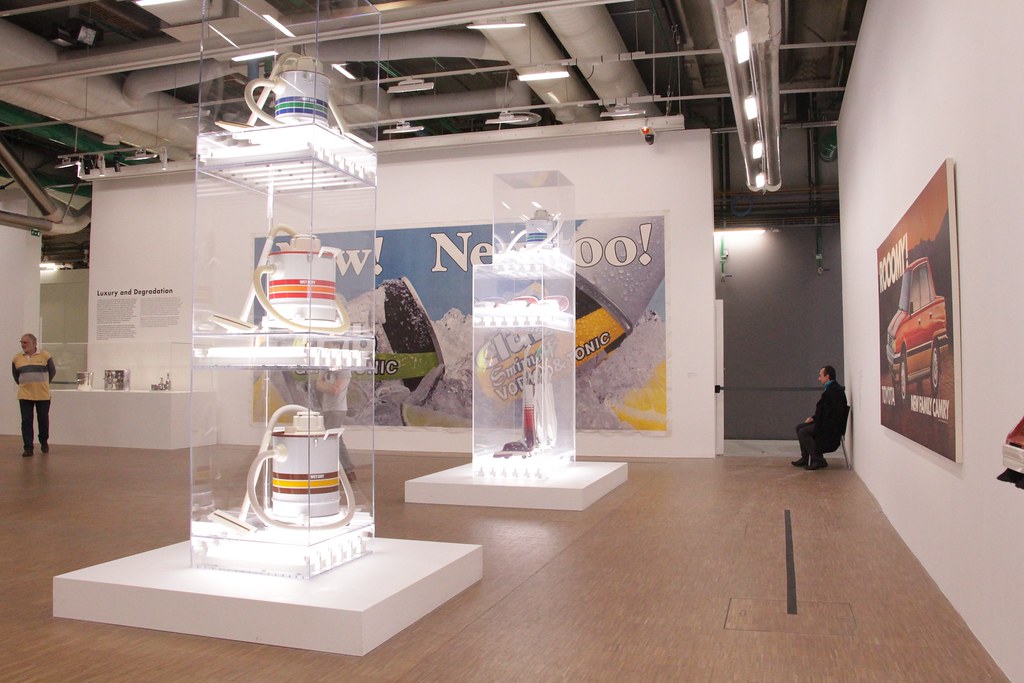 Following this, we are fully merged into the persona of Koons that we all know. Displayed across the room are a number of sculptures, many taken directly from popular culture. This included the infamous Michael Jackson and Bubbles sculpture of 1988. There is something haunting and actually very disturbing about this sculpture. The dark, lifeless eyes stare out at the viewer. Observing this sculpture for quite some time had me questioning the choice of materiality. The imitation of gold seems to have put Michael Jackson and his monkey on a high pedestal. The aggrandisation I guess pop culture gave the singer. However, for me this is merely piece of grotesque commercialsation. Each to their own. Upon looking at Koons’ sculptures, I did often question myself about the nature of ‘what is art’ and if these sculptures were a testify to such.

It should also be noted that part of the exposition is not suitable for those at least under the age of 18 – this is the Made in Heaven room. Lets just say that some of the things I saw can never be unseen. 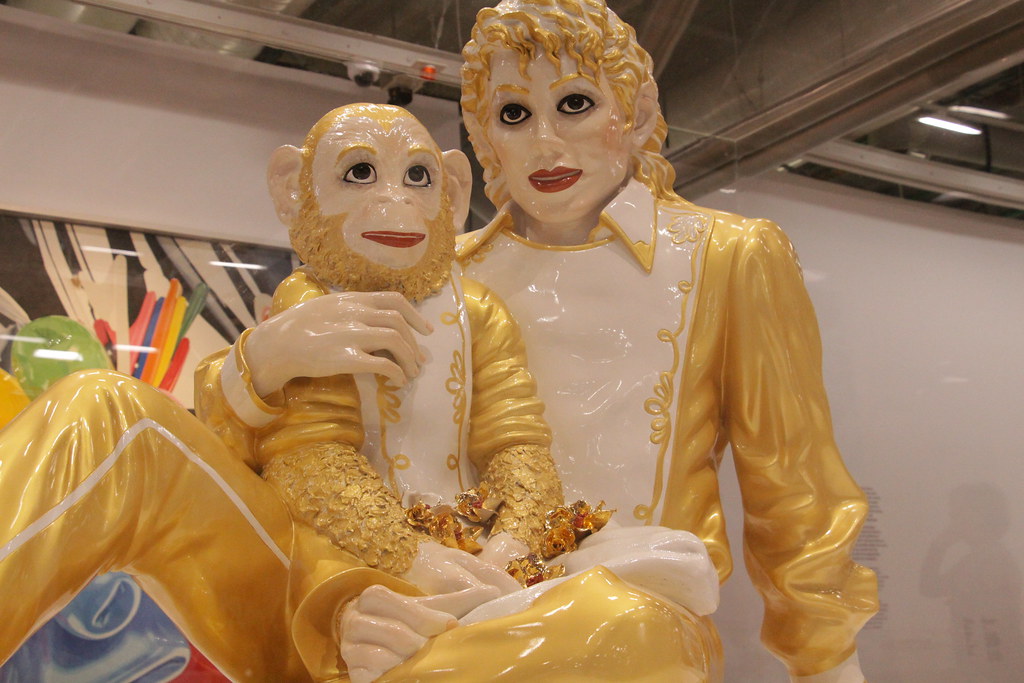 Not was all lost however. I was surprised however, to encounter some of Koons’ paintings on show in the exposition. Once again, caution should be granted to the identifying Koons as the sole executor of the work, as he had the aid of his studio assistants to paint the works. Despite this, the vibrant, photographic quality and hyper realism of the paintings were wonderful. In fact, many of the objects in the scene resonated with my childhood – from little toy figures, to my personal favourite, Play-Doh.

Although we can criticize all we like regarding the artistic skill and ethics of Jeff Koons’ work, one cannot dispute the fun and lighthearted nature of his works from the 1990’s. This was one specific part of the exposition that I was particularly looking forward to seeing were the intentionally celebrated enormous inflatable sculptures. The exhibition includes Koons’ Celebration series, to which on display are Balloon Dog (Magenta) (1994-2000) and the giant Hanging Heart. Looking at these sculptures, one almost escapes back into childhood, as there is something amusing about them. Despite the kitschness of them, I really quite like them, in an ironic way of course… In 2009, Jeff Koons joined in unison with the Chateau de Versailles, and hosted an exposition within the Chateau itself. Situated in the different rooms and courtyards of the palace, I can only imagine how interesting a juxtaposition this would have created. Therefore, after seeing this big sculptures in the Centre Pompidou, I think I would have preferred to have seen them in different setting. 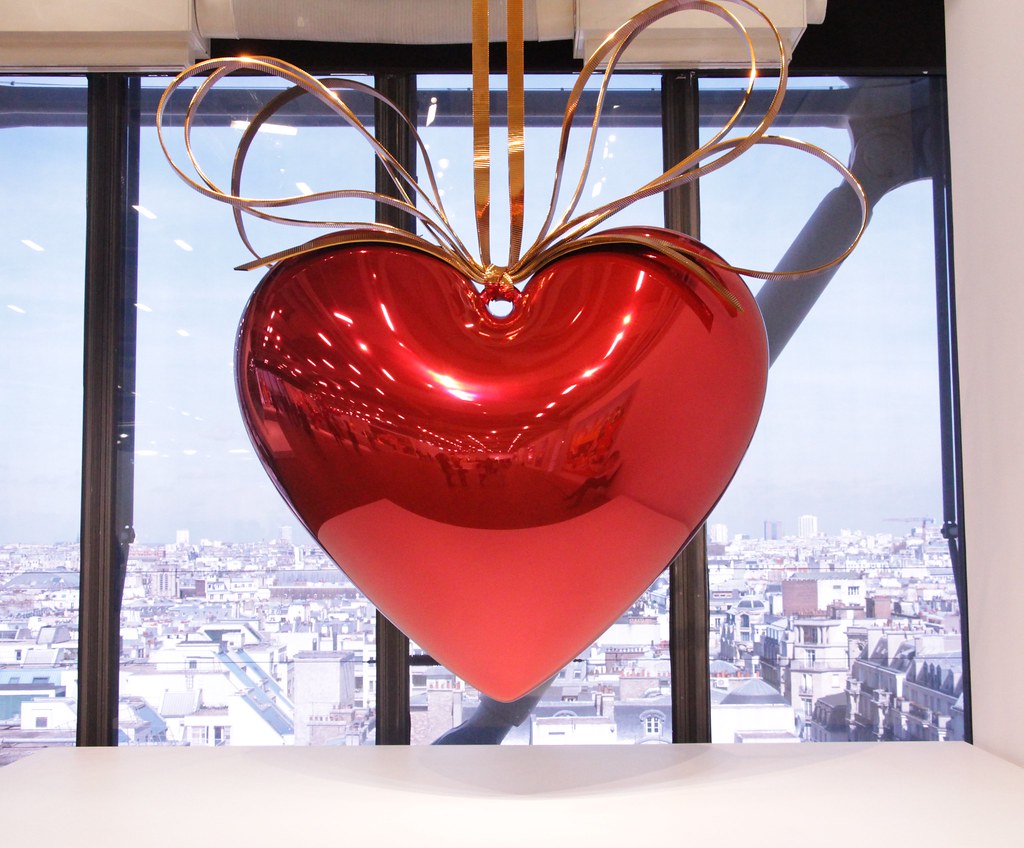 Concluding the exposition, Koons’ most recent work looks back to the world of antiquity for inspiration. The series titled Gazing Ball, includes cast figures of various famous antique sculptures with gazing balls placed on them. The aim, I guess, of such pieces is to force viewers to question the relationship between art of the past and the present, to enquire about the History of Art in general. However, I could not even allow myself to probe such questions, and to me they are simple an attempt to create something abstract and problematic.

Despite all the negative comments made, I did really enjoy the exposition. What I liked was the experience of seeing these various works, and watching others encounter them also. As many critics have mentioned, there is something very familiar and accessible with Koons’ work, therefore it will come as no surprise that visiting the exposition were many school trips. Situated around all the works on show are invisible alarms, that were going off right left and centre throughout my visit – from people too close to various sculptures to little children wanting to touch them. This just proves the interactive quality of Jeff Koons’ work, which is probably why he has been such a success throughout the world. We are only human after all.

Even though the ‘meaning’ of the work may have been disregarded by myself, Koons’ works are extremely photogenic, and so I took great pleasure from taking many photos of the various works on show. And I certainly wasn’t the only one enjoying the interactive nature of his objects. With the reflective works, many people were actually queuing to be able to take the perfect selfie reflection – although interacting with the artwork, these are surely just acts of narcissism that is in turn represented in Koons’ work? The vain society of today, and the sheer dependency for material, therefore seems to parallel the sculptures of Koons and perhaps his work has more layers than I had first anticipated.

Whether a fan or not, one cannot argue that Jeff Koons has caused quite a stir in the world of art throughout his career, instigating the need to question various important questions about commercialism, the production and the meaning of art in general.

Have you been to the exhibition? If so, let me know what you thought of it! Or perhaps you decided against going to see, which in that case, I would love to hear your thoughts. 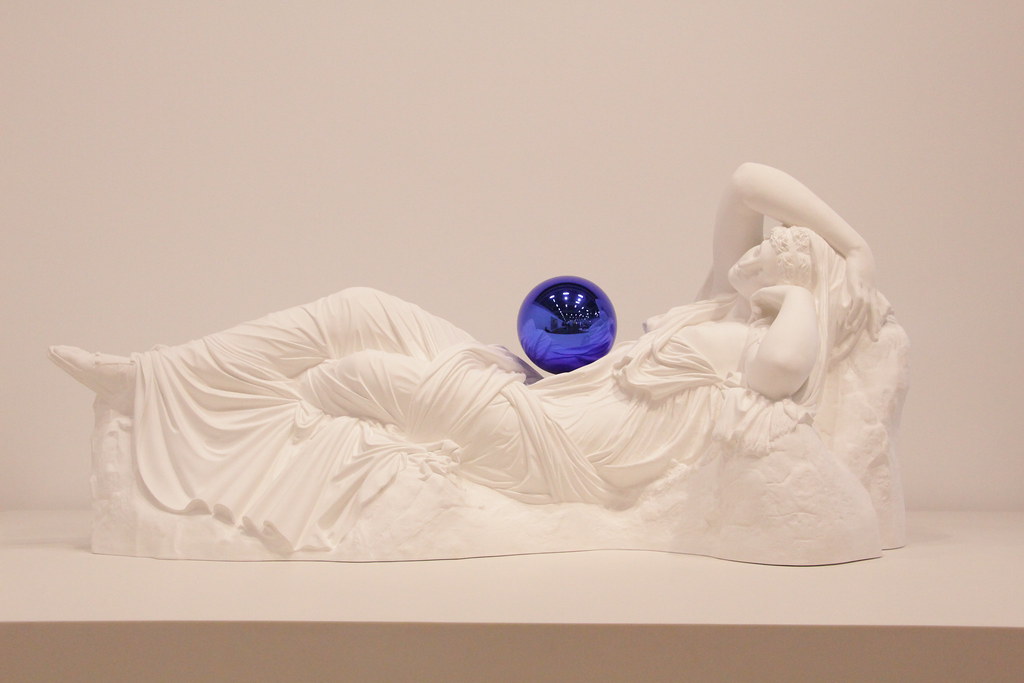 To get more information about the exposition, head over to the Centre Pompidou main website: https://www.centrepompidou.fr/cpv/resource/cABRrbG/r4ydaM6