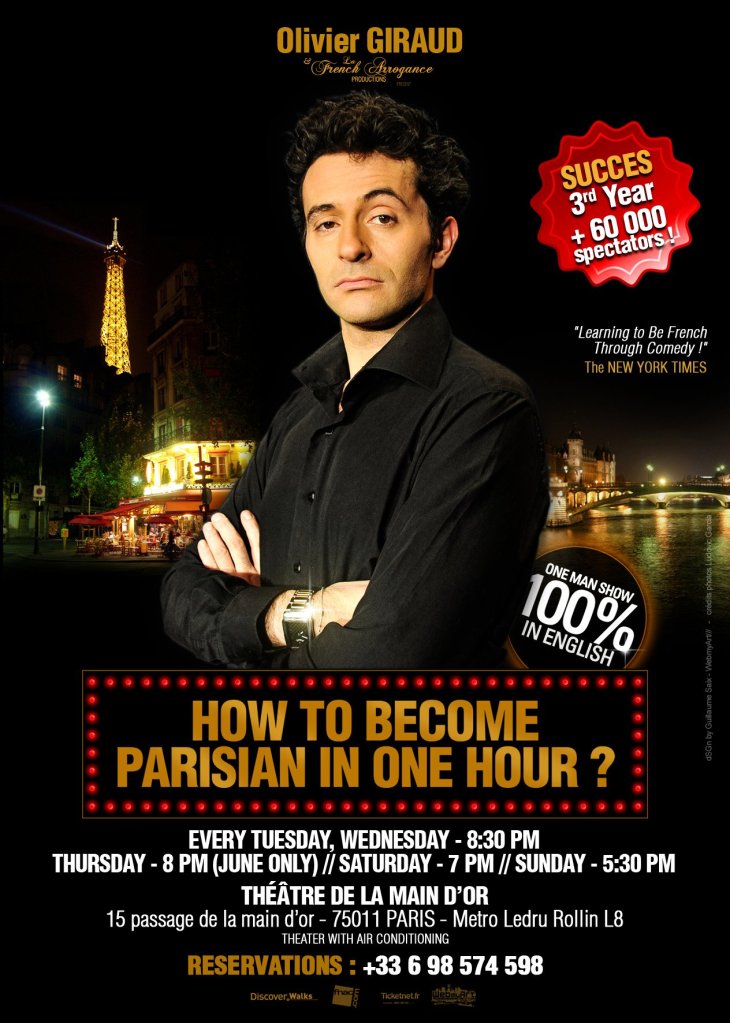 ‘How to become Parisian in one hour’, Olivier Giraud

Last night I had the pleasure of taking the two eldest children to see a theatre production in Paris. However, this was not just your average show. No. It was a one man comedy show, all about how to become Parisian. It was absolutely brilliant! Whilst the audience was relatively small, encompassing around 300 spectators, the comedian, Olivier Giraud, still managed to make the performance seem very intimate. The show revolved around certain differences in cultures between the Parisians and everyone else in the world. For example, Giraud spent time letting us know how to act Parisian when seeing the Eiffel Tower, or when attempting to get served in a restaurant. We also learned how to act on the metro, which I guess is quite similar to how Londoners are on the tube – look depressed, never give your seat to anyone (including old people and pregnant women, as Giraud said, it’s not your fault they’re pregnant!), and especially don’t talk or make eye contact with fellow passengers.

Probably the most funny part for me personally was when he demonstrated the ‘clubbing’ scene, stating that to get into a club quickly and easily, all a woman had to do was pull a duck face (basically pretend that you’ve had too much Botox in your lips and suck them in Paris Hilton style), waddle over in your high heels, flip your hair like a L’Oreal advert and have an extremely high giddy laugh. Bob’s your uncle, and you walk into the club. I must remember to try that out next time I go out in Paris… As well as getting into the clubs, Giraud also demonstrated to us how to dance when in the venue, and entice men to buy you free drinks. Not only did he spend a good couple of minutes dancing to Britney Spears ‘Gimme more’, evidently enjoying himself quite a lot, but he asked a member of audience to come up and do the dance with him! This involved middle-aged Australian Jane to swallow all her pride and self-reservation and attempt to copy Giraud’s enticing dance moves. Jane unfortunately wasn’t quite as good, but practice makes perfect right… Giraud criticised the American (and English he said! How rude) way of dancing, mainly twerking. For those reading how don’t know how to twerk or what it is, a little venture to youtube will enlighten you to the subject. Although I feel like I should state some kind of warning before you do. Granny, don’t google it! It’s basically women shaking their booties and doing some other provocative dancing. Giraud said that Parisian women do NOT do this type of dancing, so alas, I guess I will just have to stick to my robot dance moves (as usual).

Overall, it was a lovely evening and I think the teenagers seemed to enjoy it too! The show was all in English bar the odd phrase that we had to repeat after Giraud, such as Oh la laaaa and some other stuff I cannot remember! If you’re in Paris in the next couple of weeks, or months (I’m not too sure how long the show is running for), do go and see this performance! It is witty, funny and extremely entertaining. But also very insightful. I feel as if I have now entered into the mind-set of a Parisian, and so will you too if you go.

Check out a few minutes from the show on the youtube video below:

The website for all the dates and extra information for the show is here: http://www.oliviergiraud.com/UK/