Salut from France! I thought it was time to update y’all on the happenings of my life so far having arrived in Paris on Monday. It’s so hard to believe that today is Friday already! Seriously, where has the time gone? For those who don’t know, I am an Au Pair for three children (who will be referred to by initials throughout my blog) P – 15 years old; Con – 13 years old girl; and Ch, the youngest boy at 8 years old.

On Monday I left England via Liverpool Airport, and made my way to Paris. Everything went smoothly, including trying to pull my two extremely heavy bags whilst negotiating the Parisian airport (which was very confusing). It took me about 10 minutes to finally find the bus stop. However, it all began to go down hill from there. I ended up getting off at the wrong stop. I am still adamant and will only take 50% of the blame for this occurrence, as there were no signs of intended bus stop for me to get off. So, it’s partly my fault for not asking the driver, and the council’s fault not properly sign posting the name of the stop! Instead of the stop I was meant to get off at, I ended up coming off at the Arc de Triomphe! It looked absolutely spectacular and majestic in the evening sunlight, but this was not the time to have a look as I had to find my Au Pair Mother (M from now on)! Anyway, after attempting to carry my bags down this very big hill and negotiating the french traffic, I gave up, as did my Au Pair Mother, and she came and picked me up. I was afraid of disappointing her, but she was absolutely fine about it which was very reassuring. We then drove to the house in the beautiful town of Garches, and then I met the rest of the family! They were very welcoming, and exceptionally nice which was lovely. I have been made to feel right at home here. After dinner, it was bedtime! It all felt surreal at this point (as it still is four days on), and as I lay in bed, I tried to make sense of everything. The internet is very good here, so skyping and whatsapping with family and boyfriend is great. It’s almost as if I am not that far away from everyone, a bit like being back at uni. Anyway, after a long day traveling and getting used to my surroundings it was time to sleep.

On Tuesday I woke early, as the night before M had offered to take me to one of the local markets in Versailles. It was such a beautiful day, the sun was shining and at 8am there were already a lot of people going about their day. The market was massive! It included stalls outside as well as some inside various buildings. There was so much fresh fruit and vegetables, oh, and plenty of cheese! M must have bought about 10 big pieces of various cheeses, but hey, I’m not complaining! It was really refreshing going to the market, seeing all the different foods on sale and just getting used to the French way of life. This is something that I am not used to back home. Usually we just go to a supermarket, as the UK doesn’t really do fresh markets on this scale, which is a shame.

Beautiful array of colours of tomatoes

After the market, we then walked around Versailles for a bit, as this is where the children go to school. Then it was my turn to venture around Garches and attempt to get my bearings of the place that I will call home for this year! It’s such a quaint little town. It’s not very big, but it has everything you could need, with quick access into the centre of Paris as well.

In the afternoon me and Ch (the youngest of the children, he’s 8 years old), made cookies! Sadly, our patch only allowed for us to make 12 cookies, so as you can probably guess, they were all eaten up pretty quickly! Probably one of the biggest surprises was meeting the family cat. For anyone who knows me, I am a little bit obsessed with cats, and miss my one very much. So learning that the family had one was lovely! Except, the family believe that he is living a double life – living here, but also living with an elderly woman next door. They know this because the cat some times comes to the house smelling of what M calls ‘Old lady perfume’! I will make it my mission to get the cat to choose us over her!

The family cat – too shy!

Every Wednesday there is a local market in Garches that I will go to in order to get food for the week, and today, me and M went to have a look around. The market was not as big as the one yesterday in Versailles, but there was still plenty of cheese!

In the afternoon, I decided to go for a walk to get used to my surroundings, and found myself walking into Saint-Cloud Park. It is absolutely beautiful. Because it’s just becoming Autumn, all the trees were magnificent colours, and it was still fairly hot today in Paris. Saint-Cloud Park is amazing, and pretty huge. As I kept walking I could’t help but think that this was a never ending Park – which is seems as if it is, it goes all the way to the river Seine. If you’re visiting Paris I would definitely recommend coming to Saint-Cloud Park, as it’s the perfect destination to get some peace and quiet, and a beautiful spot for a picnic. I also ventured into the local tennis club at Saint-Cloud Park to have a look, and it turns out Hugh Grant goes there! They had a picture of him on one of the courts in the club house – maybe I should think about joining there!! One thing that you may also not know about Saint-Cloud Park is that Sinead O’connor’s ‘Nothing Compares 2U’ was filmed there – I’m going to have to re-watch the video and perhaps do a parody some time! Saint-Cloud Park is definitely the perfect place to go running, so hopefully next week I will get the time to have a run around. When my parents come, I’ll definitely have to tell my Dad about it as he is a keen runner, he’d love it here!

After my little adventure, I later played football with Ch and P in the garden. It turns out that I am awesome. David Beckham, watch out!

I spent the morning with M practicing driving. The reason why is because during the week, I have to pick up the children from school and take them home or to various extra-circular activities. So it’s really important that I can drive! I’m not finding it too hard. Although I must admit, on the first day I did attempt to drive on the left hand side of the road, much to M‘s dismay! The car I am having to drive is a huge people carrier, or what I would call a truck/bus. It’s massive. And to make things worse, I’m finding it really hard to grasp whether I’m too far on the right or the left, which means going down very narrow two-way streets a nightmare (there are many of those around here!)

After taking Con to school with M, I decided to venture into Paris. I had a browse of some of the main high-street shops, and then had a lovely lunch and a stroll around the Seine. The house is very close to Paris, taking only around 18minutes to get into the centre which is nice. It’s like having the best of both worlds! I had a great time wondering around Paris, and it just reminded me how lucky I am to be calling this my home for the year. I’ve also decided that Garches, where I am living, is almost like living in Wimbledon – close enough to the centre to get in quickly, but surrounded by lovely scenery, feeling not too much like being in a busy city centre. 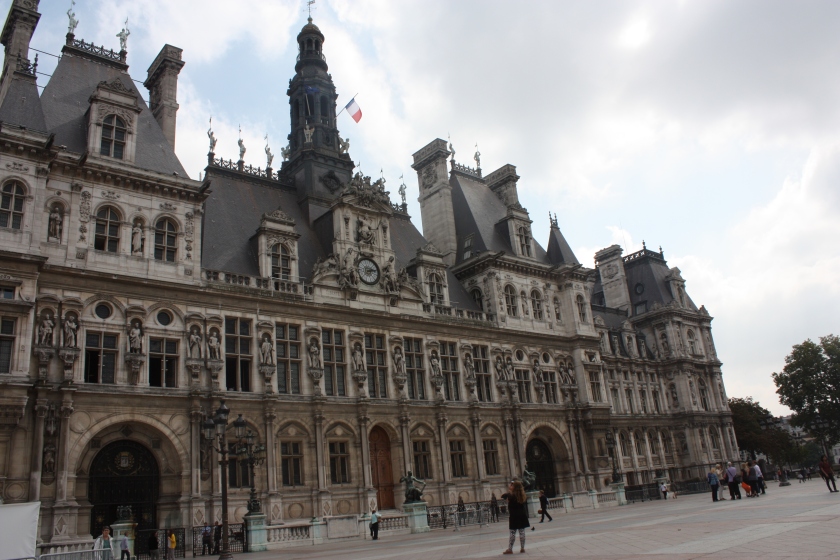 A one man band!

Bouquinistes along the river Seine

For those who have never been to Paris, the river Seine is lined with many Green ‘shops’ like these. They are called Bouquinistes, and sell many things from used and antiquarian books to postcards, both new and vintage, and posters. If you get the chance, stop and have a look at these stalls – I’ve bought quite a few things from them, which make great gifts to either yourself or friends! 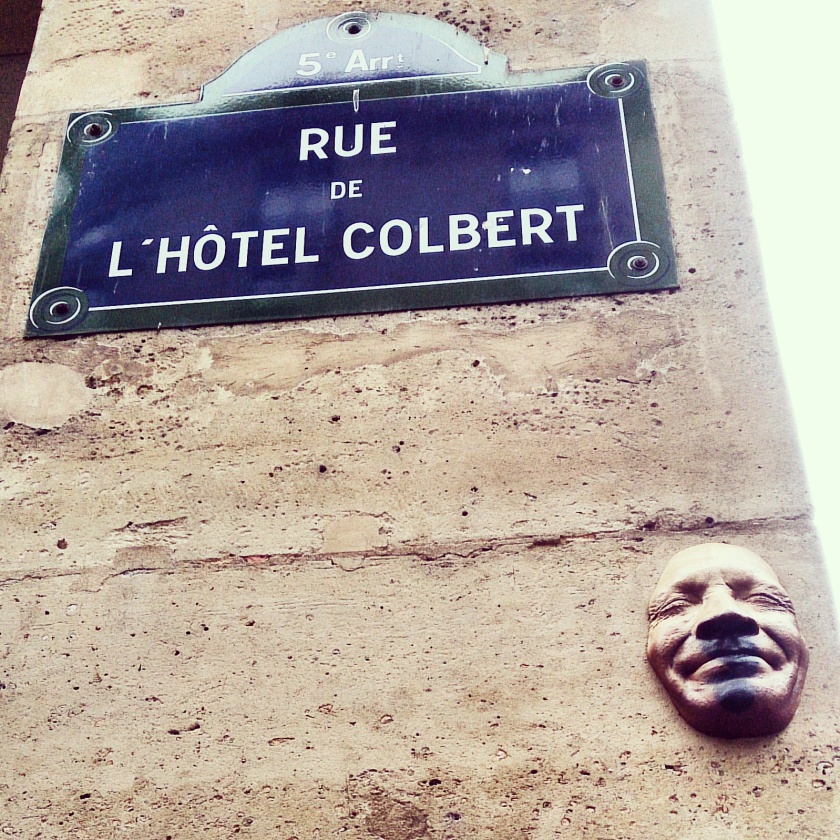 A funny face appearing from a wall

Yesterday was pretty easy going. M and I practiced some driving – I’m beginning to get used to driving on the right side of the road, but my visual awareness of being too far on the right or the left is very hard, so if anyone has any tips I would be incredibly grateful! In the afternoon I played tennis for about 10 minutes! I was meant to have a tennis ‘test’ to have my level accessed, but the coach turned up an hour and 15 minutes after we said we would meet, so I was only allowed to play for a short time. It was so nice to get back on the court, I’ve really missed it! They invited me to come again next friday to see if there are people I can play with, and if I join the club I could train with the first team and be their reserve, but sadly the membership costs a bit too much so I will wait and see. All I really want to do is just play! After driving with M to collect Ch from school, we came back and I made a big dish of risotto with bacon, yum. To round up the day, me and Ch watched Ice Age 3, or as it is known in France L’Age de Glace.

I’ve been having a great time so far. The family have made me feel really welcome into their home, and I can’t wait to see what the rest of the year has in store!

[UPDATE] I forgot to post a picture of the wonderful gift hamper that the family made for me when I arrived! It was full of many things Parisian related, like specialty chocolate and biscuits to wash soaps and stuff for my language school. How sweet!

A welcome gift from my Parisian family!