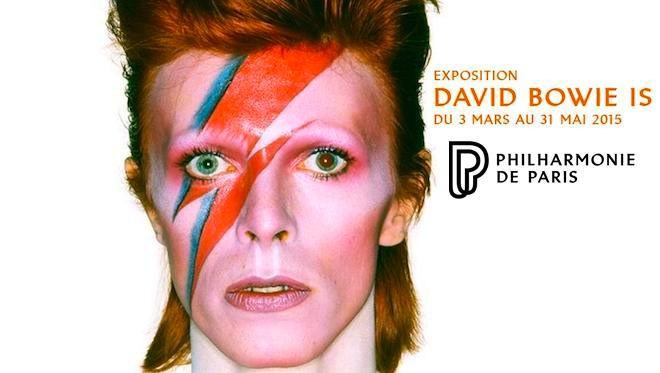 Back in 2013, the Victoria and Albert Museum in London hosted an extraordinary exhibition that offered a unique opportunity to delve into the wonderful career of one of music’s greatest legends – David Bowie.

From a personal perspective, I was beyond excited to find out that the V&A David Bowie Is exhibition would be making a stop in Paris for numerous reasons. When the retrospective first opened in London, I was unable to go and see it due to the rapid rate at which the exhibition sold out.

But for those who did not have the opportunity to see the V&A exhibition first hand, also had the chance to be able to ‘virtually visit’ the exhibit via one of the many showings of the exhibition at the cinema. I can probably imagine that you have absolutely no idea what I am talking about, but just hold on one second. Due to the sheer popularity of the exhibition, the V&A presented a live screening in the form of David Bowie is Happening Now, which was shown nationwide. Within this, cinemagoers had the chance to ‘walk’ through the exhibition with the curators, and watch behind the scene clips with extra archival footage and interviews being shown. My Mum and I bought tickets immediately, and finally had the chance to be a part of this fantastic retrospective. With this said, you can probably imagine how excited I was to hear that David Bowie Is was making a stop in Paris.

The exhibition begins with the emergence of Bowie as a musician, which then chronological traces his career and transformation. David Bowie Is is interactive and engaging. As visitors walk around the exhibition, moving in and out of the evolution of ‘Bowie’, the music changes in the headsets carried, and as one approaches the various screens throughout the exhibition showing video clips and interviews, the headset also changes. This exhibition is seamless. With a lot of ch-ch-ch-ch-changes – pun intended.

The David Bowie Is retrospective offers visitors a multi-dimensional experience, comprising of over 300 objects. The exhibition includes handwritten lyrics where one can see the processes and drafting of various songs – what is fascinating is seeing the different words and phrases crossed out, changes which certainly would have created very different songs than the ones we know. Also on display are photographs, music videos and album artwork.

Especially interesting are the various sixty original iconic stage costumes on show, including Ziggy Stardust bodysuits (1972), and Alexander McQueen’s Union Jack coat designed for the Earthling album cover (1997). Displayed as if Bowie himself was wearing them, viewing these famous costumes in person is an incredible experience.

Something that really stuck with me after visiting, was finding out that Bowie is actually a really good painter (which may not surprise some of you). I had never really known about this side of the singer, and so it was refreshing to be able to view some of his own artwork on display within the exhibition. Not only was Bowie’s creative side shown in his artwork, but throughout the retrospective his own drawings and illustrations for various music videos, films and even sketches of stage designs for the Ziggy Stardust tour, are on show.

David Bowie Is is not only about the physical manifestation of Bowie’s various personas, but it also offers a glimpse into the process of writing songs and creating lyrics. What I found thought-provoking was Bowie’s contraption called the Verbasizer. A computer application, the Verbasizer brought together different verbs and words that Bowie claimed helped with the process of lyric writing. Having read a lot of critical views regarding this specific part of the exhibition, and indeed Bowie’s creative past, this computer programme is an interesting addition to the enigmatic character of Bowie. Whether you agree or disagree with such method is up to further debate. (You can read a bit more about it here: http://www.hypebot.com/hypebot/2013/03/ty-roberts-on-the-trail-from-working-with-david-bowie-to-co-founding-gracenote.html)

As one explores the visually stunning and incredible exhibition, the finale brings you into a room surrounded by projections of Bowie with various videos from stage performances. It is almost like being physically at these concerts. (For those unlike my parents who have seen Bowie in concert live, this is the perfect opportunity to imagine what it must have been like.)

Overall, David Bowie Is offers an incredible multi-media and multi-sensory experience, providing a glimpse into the complex artistic and creative transformation of David Bowie. Bowie die-hards and enthusiasts, as well as those on the lesser scale, will undoubtedly enjoy this exhibition.

(Photograph taken from the Guardian)